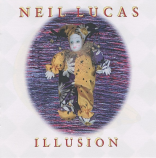 Neil only shot one Video for the Illusion album which was titled Freddie. This was the original track from where the album originated from.

As you will see Freddie is a song about Freddie Mercury and Neil styled it to sound the same as Queen’s Delilah track from their 1991 Innuendo album. Delilah was a song Freddie wrote about his favourite cat!

The video is a tongue in cheek production which he loved to create. It was Remastered in October 2021 and now includes a take with Neil wearing Queen's Invisible Man Neon Glasses. Neil was delighted to include this and felt it complimented the fun video!!