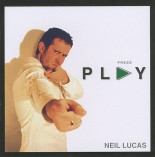 The Play video was filmed well over a decade after the album was released!

Neil never got around to shooting a video at the time but always wanted to do one for this title track! He said recently: "It's better late than never!" ﻿

At the time he concentrated more on Cocktail Train as this was the first track Neil recorded for this album in Switzerland. This was filmed the day after the show The Music of Our Lives at the C+B Seen nightclub in Salisbury back in 2001. Neil hired the whole venue for the afternoon/ evening for all involved in the show. Again, it was a light hearted fun party with plenty of Cristal Champagne flowing!!

Neil performed Amask and A New Day at The Music of Our Lives and they were used for videos for the album; Amask in its entirety and A New Day as a video edit.

There is also unseen footage from this show which may come to light in the future!