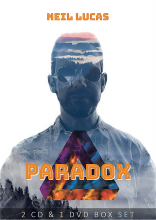 The Paradox videos were filmed between September 2019 and June 2021.

The first video Solitary Life was shot in Montreux, Switzerland in September 2019 during one of Neil’s many stays there. The rest were filmed in the UK which include Ballet, Disco and Chillout- Neil is extremely pleased with how they all turned out and feels they suit each track they were intended for.

Neil filmed a video for the Consequence track at Knowlton Church, Dorset, but due to English Heritage and restrictions this could not be included on the DVD- This version is only available on YouTube. Neil shot an alternative video for this track in June 2021 at Lodge Studios in Wiltshire for the DVD which is included in the Box Set.

As you will see the videos are uniquely varied and the title track video Paradox is a montage of all Neil’s work to date incorporated into the six minute plus video.

Neil, as always enjoyed making the videos for the album and to his usual fashion they are just tongue in cheek, but this time some of the songs are quite questioning- maybe it's because Neil has grown up now and looks at life a bit differently!

We hope you enjoy them as much as we do!